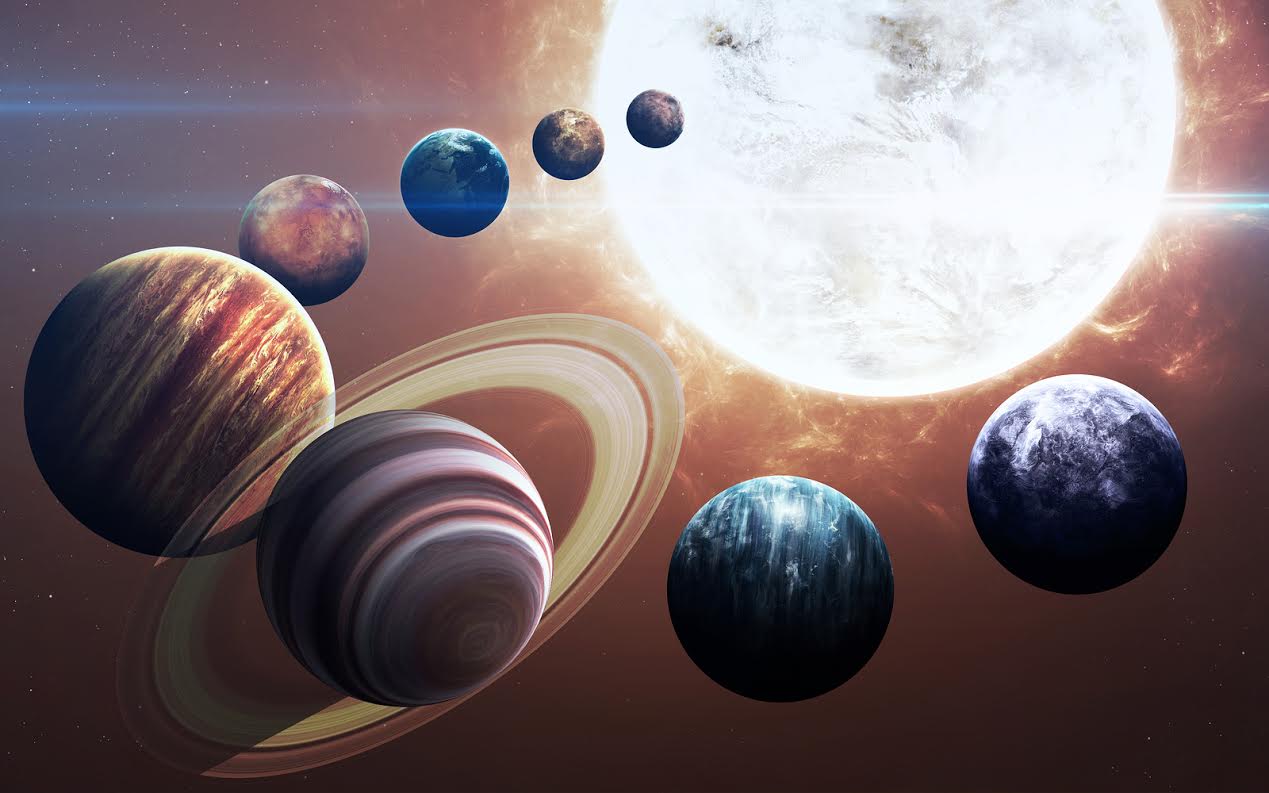 From the beginning of civilization, one can refer to each successive generation as the searching generation. The vast universe and the constellation of stars have mystified every culture up to the present. Ancient astronomers did not have the benefit of academic background to make scientific inquiries regarding the creation of the universe. Today, scientists build great astronomical observatories, positioned on the summit of some of the highest mountain peaks on the earth pointing towards the heavens hoping to connect with celestial beings from neighboring planetary systems.

Various forms of religious beliefs dominated ancient civilizations, and these were the product of the worship of many gods. Pagans considered themselves helpless and at the mercy of their gods. Their gods were responsible for everything that occurred in their lives from rainfall, sunshine, thunder, lightning, and volcanoes, to the birth and death of villagers. Consequently, they appeased their gods with gifts and many forms of sacrifices including human sacrifices by Aztec priests.

Mythology, broadly, was the basis of ancient religions. Their gods represented everything from the sun and the moon, to love, war, and even jealousy. Ancient Egyptian, Roman, and Greek gods included Abtu, Horus, Isis, Osiris; Diana, Mercury, Neptune, Venus, Pluto; and Apollo, Aphrodite, Hera, and Zeus. In contrast, modern civilization makes vast expenditures in scientific research and experimentation in search of scientific answers to the origin of the universe.

Is the search for answers to the universe strictly a scientific search? World leaders and individuals alike search for solutions to problems that perplex humanity in the postmodern era, and to unresolved issues of the premodern and modern periods. The premodern world needs answers to the great questions that can help to inform the meaning and purpose of life such as the following ten questions:

TEN QUESTIONS THAT CAN INFORM LIFE IN THE UNIVERSE

Scientific research indicates that the understanding of the universe is coming into focus, as rockets equipped with advanced electronic technology speed through the infinite universe collecting data from the cosmos. Astronomers provide the world with images of the vast universe beyond the Milky Way Galaxy, and with scientific theories, such as the beginning of the universe with a “big bang” some ten to twenty billion years ago. Can human beings omit God in the search, and would humans not face the challenge of seeking a superior intelligence of similar credentials to answer the questions of the universe?

The complex universe coming into existence by a cosmic accident begs the question, where did the elements come from that predate the “big bang?” Does the “big bang” suggest that human life is a meaningless journey lacking in meaning and purpose? Could this be the reason that human lives appear ordered by “material existence” as opposed to a higher “spiritual existence? Does it not seem contrary to the totality of human knowledge, intelligence, and experience? The answer to these profound questions should underpin intellectual, scientific, and religious inquiries.

The world has passed through many ages delineated such as the Dark Ages (Middle Ages), the Age of Enlightenment, the Age of Industrialization, the Electronic Age, the Space Age, and our current Information Age, which some refer to as the new knowledge economy. Despite the evolution of human knowledge, academia, advancements in science and technology, intellectual, financial, and material progress, human beings are in search of a better life. The world’s population live in various stages of hope and hopelessness in daily acts of sub-optimal living.

With the advent of mass education, the world has made remarkable progress in human knowledge of the universe. Paradoxically, human knowledge has set apart religion and science as generally distinct and separate schools of thought regarding the origin of the universe, and evolution versus creation. Schools, colleges, and universities have become the manufacturing centers of human knowledge. The knowledge base of our modern era is a testimony to the search for understanding of the physical matter.

The word that best describes the evolution of human knowledge in the twenty-first century as phenomenal! Awareness is growing more rapidly than ever before in the history of civilization. The accelerating pace of change, however, is creating anxiety among individuals, families, societies, and nations. With mastery of mass production techniques, and with the design of new high–speed machinery, fewer workers are required at the wheels of production. According to Price Pritchett, “In the 1900’s more than ninety–five percent of the people in every country around the world did manual work. Today in the U.S. only twenty percent still do manual work.”

This new economic era drives the high–speed recapture of production costs and, in particular, the demands for reduction in lead time, and speed to market. These drivers of the new economy, combined with a need for higher profits, fuel the global flow of capital and information at high speed across continents. It is an inescapable fact that knowledge of science and technology underpins the remarkable scientific achievements of the postmodern era. For instance, the development of new X-ray techniques, new surgical techniques, and new “wonder drugs” gave modern medicine a victory over some diseases that once crippled past civilizations.

IN SEARCH OF PURPOSE AND PROSPERITY

In search of purpose and prosperity, many individuals from underdeveloped and developing nations abandon their homelands to migrate to the West, where democratic systems of governments flourish and where immigrants and citizens have the freedom to practice their culture and religions. Migration also occurs among the middle–class and among those who send their children to the West to attend university to better their academic abilities. Many of these individuals take up residence in the host country and never return to their home country to help develop the educational infrastructure.

Underdeveloped and developing nations refer to this departure as a “brain drain.” Developed Western countries are not responsible for the drain of intellectual capital from underdeveloped and developing countries to developed countries. However, the consequence of a “brain drain” on intellectual capital results in a deficiency in skills that weaken the educational and intellectual foundation of emerging nations, which gives rise to a search for methods of survival. Human beings can develop material intelligence because people operate in the material realm, but where can people find superior intelligent guidance and direction in the twenty-first century?

Despite the diversity of world religions, scientific knowledge seems to surpass religious knowledge, with physical evidence of scientific progress represented in every aspect of daily life. Those who track world trends indicate that our storehouse of knowledge doubles with each passing decade, evidenced by the ease of production of supertankers, super–cruise ships, supersonic airplanes, long-range space probes, genetic engineering, and genetically engineered foods. Notwithstanding, science has not provided humanity with purpose for human existence, or the purposeful use of the prosperity that scientific knowledge brings. Neither with an undeniable first cause of the universe nor how to engender the best potentials in human beings.

“The detailed study, which tracks forced displacement worldwide based on data from governments, partner agencies, and UNHCR’s reporting, found a total 65.3 million people were displaced at the end of 2015, compared to 59.5 million just 12 months earlier.” Concurrent with the movement of refugees searching for a better life outside of their homeland, the scientific mind searches for other worlds (earth-like). The goal it seems is to jettison the wealthiest individuals on planet Earth to unknown worlds, as the search among the world’s refugees intensifies for purpose, prosperity, and destiny, reaching all nations.

Leaders in contemporary society fall short in inspiring their citizens regarding conclusive answers to the evolution and the purpose of human existence as a scientific construct. Human existence is a never-ending search to understand human life, purpose, and destiny. The inquiry began with ancient religions, ancient mythology, tribal beliefs and rituals, and other beliefs. Some of these belief systems were Agnosticism, Neopaganism, Spiritism, Universalism, Scientology, Humanism, and Zoroastrianism, as well, some of which date back to antiquity.

Human beings have now journeyed from the premodern, modern, to the postmodern era, without definitive answers to unanswerable questions such as the beginning of the universe, and “Who is God?” Major world religions such as Hinduism, Buddhism, Judaism, Christianity, and Islam provide competing narratives. It teaches humanity that human knowledge is still in the embryonic stage in the search for answers. This understanding of the evolution of human knowledge should humble human beings. It should put in perspective as the search continues for definitive answers to the incomprehensible universe, concurrently, between religion and science.