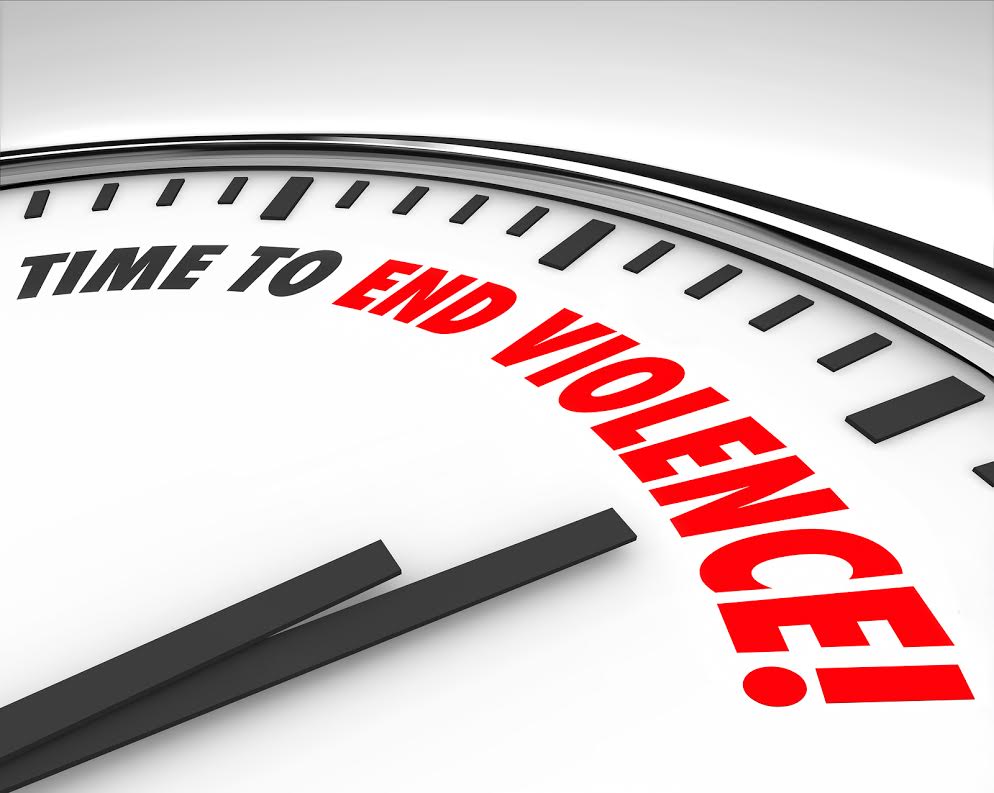 First, “What is violence?” Is violence a symptom or a problem inherent in our postmodern world? Is it something more significant an undefined by modern thought?  Violence is a symptom of a broad and underlying problem within the human spirit. There cannot be an end to violence outside of the imposition of the will of the human heart. Violence comes from the head (the human compulsion, the ‘human nature’), but non–violence comes from the heart (the spiritual compulsion, our ‘spiritual nature’).

Violence is not a worldwide phenomenon. Knowable human conditions such as poverty, lack of education, drug abuse, mental illness, racial conflict, underemployment, family breakdown, and the availability of weapons of violence. Then there are conditions of the human spirit such as greed, anger, want, hate, or revenge. These complex and multi-layered conditions have perplexed humankind throughout the premodern and modern age, and up to the postmodern era, as violence continues unceasingly at every level of society. Paradoxically, neither religion, education, nor social and intellectual sophistication has demonstrated the capacity to mitigate violence as a scourge in human relations.

The news media presents a daily chronicle of violence between individuals, family members, street gangs, and nations. Whenever violence occurs within society, there is a call for higher human authority. Is more human authority the first answer? Evidently not! Nations attempt to suppress violence by using measures such as capital punishment, mass incarceration, undergirded by some means of rehabilitation, but these actions, though necessary, does not adequately address the causes of violence; instead, they attempt to, rightly constrain people’s behaviors, hopefully in the future.

Human laws are essential, but they do not foster overall goodness in people, or right behavior because they are applied after-the-fact. Obedience to human laws mostly helps to promote compliance, based on fear of censure or punishment by other human beings, rather than obedience to the higher spiritual laws, underpinned by the fear of God as a first imperative for influencing human behavior for the overall betterment of humanity.

People know experientially, by intuition, and by empirical evidence that youth violence is becoming more dominant in our postmodern age. The postmodern family is struggling to cope with one economic onslaught after another, the negative impacts of job loss, fatherlessness, and a society that accepts violence on television and movies as a national pre-occupation. The visible evidence demonstrates that there is a need for a broader-based and multi-layered solution perspective by religion, (Spirituality), family, youths, government, educators, citizens, and corporations, working together to achieve a universal national perspective on violence. The following seven strategies should help to stem the frequency of violence in the world.

The intelligent observer is aware that some human laws (intentionally or unintentionally) violate the principles of God’s Law. They often become the archetype for unwittingly engineering poverty, which we must not confuse with the sayings in the Scriptures, “You will always have the poor among you…” (John 12:8 NIV). Paradoxically, some of the wealthiest people on Earth are Ministers of the Gospel, but how does such an incongruity square with the ideals of religion and spirituality that fundamentally puts the needs of the needy first?

People are aware that the rich and poor lie at the opposite ends of the spectrum of violence, underpinned by greed for “wealth” and “want.” There is a need for religious leaders to create a “New Mission-Critical Direction” (NMCD) that enables them to help build great nations by looking through prisms of spiritual, moral, social, intellectual, and physical human development. These five foundations of human development are mutually inclusive. They constitute the wholesome growth of people, without which, human beings cannot develop to their fullest capacity, fully actualized for service to others, as members of the human family (Reference: © 2011 Gibbs and Grey. Five Foundations of Human Development (FFHD) – Foundation 3: Social Foundation – 3.4. Self–esteem, pp. 315 – 333).

The home is the first society of “altruistic love.” Absentee parents sabotage the survival of their children ― knowingly or unknowingly. The ruin of a nation begins within the family because families are the foundation stones upon which to build societies, with children at the nucleus. Parents should strive to make their most significant sacrifice that they are capable off, for the benefit of their children, and those in their orbit, as it was yesteryear. The ruin of the family begins with marriage breakdown, though some causes may come from outside of the family. Some postmodern families are under siege by fatherlessness, delinquent parents, economic insufficiency, under-employment, family disloyalty, and lack of family cohesion.

Parents and family members must accept full responsibility for their children’s behavior. When the male partner abandons the relationship, the family may not only become poorer for it, but the arc of discipline is removed, placing an unnecessary burden on the mother, and exposing the children to undue external influences, frustration, grief, and delinquency.  It is still relevant to raise children in the admonition and the fear of God (Proverbs 22:6), which has been the tradition of the parent and child relationship, perhaps, even, more relevant in our postmodern world, with its unique challenges to children’s self-esteem.

The self-esteem of children is pivotal to the stability of families, communities, and nations. They, unknowingly hold the key to the future state of the human civilization. The admonishment to youths is to guard your freedom, resist the temptation for revenge, and commit to a life of purpose and non-violence. Belief in a higher moral power can change your life’s circumstances. Violence only fuels the growth of the “deficit-financed” Prison Industrial Complex (PIC). Governments have to shift scarce financial resources from more innovative and creative industrious, social justice, and economic justice initiatives at the expense of building better societies for your benefit.

Youths from underdeveloped and developing nations face more significant challenges than those in affluent Western countries, though the difficulties on different continents may differ in complex ways. The “pursuit of pleasure” and dominance over others in illicit affairs can only bring unhappiness, loss of freedom, and premature death. Seek higher education, which is what so many of you are doing, evidenced by the highest number of university post-graduation students in human history. It is commendable, especially the female youths. Do not be overcome by feelings of failure, anxiety, or depression. Seek help if you feel overwhelmed. Do not deny the wisdom of the elders. Volunteer your services, and live a life of purpose.

Notwithstanding, the empowerment of people comes from living with purpose, and from the labyrinth of a positive mind, with a clear vision. Creating a climate for responsible governments begin with leadership by spirit, integrity, and authenticity, supported by citizens that demonstrate respect for their elected leaders. This recognition must be mutual, and at the heart and center of the contract between governments and their citizens. Likewise, a “great society” is one in which the need for incarceration of individuals is in constant decline as the judiciary at its best, dispensing justice without any appearance of impropriety, regardless of people’s race, color, or social or economic status.

Citizens should love their country and its people, of every race, color, culture, and creed, even though some may walk crooked. Citizens should pray for the leaders so that they may recognize the sovereignty of people — first. Public and private leaders should take ownership for the calamities that occur in their communities, corporations, regions, municipalities, provinces, and states. They could use their elected and corporate offices to serve the good of the people as a first function of their offices. The esteem of a nation rises and falls as a predicate of its leadership.

Partisan political agendas distract nations from their higher national ideals such as love for country, positive forms of nationalism, and models of leadership such as spiritual-mindedness, character, integrity, intelligence, education, and authenticity. There is a need for the two great pillars of democratic leadership ― humility, and servanthood to be front and center of leadership in the postmodern age of international conflict, underpinned by Weapons of Mass Destruction (WMD). Humankind cannot risk the advent of another global conflict the scale of World War I (1914–1918), and World War II (1939–1945). The time has come to deploy Weapons of Mass Reconstruction (WMR) of people’s lives from spiritual, moral, social, intellectual, and physical perspectives.

Education is the base from which to build stable nations. Therefore, learning must take people beyond the pursuit of Academic Information Literacy (AIL), and adopt a Wholesome Education Criteria (WEC) that transcends AIL as the principal goal of educating students. A Wholesome Education (WE) constitutes five foundations of human development such as religious, moral, social, intellectual, and physical (Gibbs & Grey, 2011). One can postulate that eighty percent of a nation’s children attend public schools (Vilfredo Pareto, 1848–1923). The goal of countries should be to elevate public schools to high–performing academic institutions of excellence that are comparable to other private educational institutions, in discipline, performance, and achievement.

The achievement of this goal will translate to better informed and enlightened individuals, communities, corporations, societies, and nations. A WEC helps to mitigate the primary causes of divorce and its consequential impact on the lives of children. This form of education has the inherent capacity to alleviate lifestyle challenges such as unfairness, unfaithfulness, disloyalty, violence, greed, obesity, smoking, drug abuse, child and elder abuse, reckless driving, inequity, racial and religious intolerance, and social injustice. It extends beyond regional and national borders and helps to mitigate the conditions that inspire genocide and wars, alleviate the fear that overwhelms individuals and nations, and shelter the weakest among us from fear and anxiety for the future.

Corporate leaders can play an integral role in facilitating youths and individuals by affording them an opportunity to rehabilitate themselves through commercial and industrial training. (Zoukis, 2014). Wrote that, “recidivism, is a problem of the highest magnitude. Every year we, as a nation, spend over $60 billion on prison systems, a limited portion of which is used on first-time offenders. This is money drained away from early education initiatives, state universities, and other essential social services.” Retrieved from https://prisoneducation.com/prison-education-news/the-cost-of-recidivism-victims-the-economy-and-american-pris-html/. Evidently, the cost of building self-esteem in children is far less expensive and less complicated.